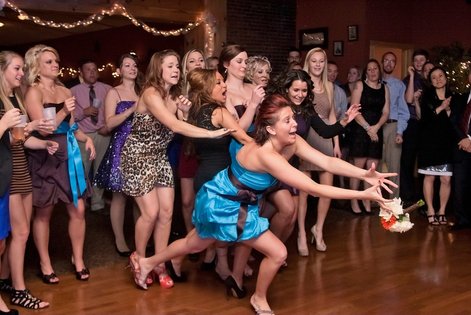 Many wedding behaviors and traditions are passed along from one generation to the next.  These traditions, including the positions in which the bride and groom stand, rituals performed during the ceremony and guest responses, all symbolize a bride’s and groom’s cultural, social and / or religious affiliations.  Consider the following list of traditions and consider if any seem appropriate for your wedding.

THE BOUQUET
Originally, brides carried spices or garlic to ward off evil spirits.  As time went on, women lost the scent bags and began carrying bouquets containing flowers.  Many times flowers carry symbolism for things such as faithfulness, love and purity

THE VEIL
Symbolizing purity and virginity, the veil was used to hide a young woman’s eyes from her fiancé.  Engagements of old were arranged, so for many, the wedding was the first time a groom set eyes upon his bride.

PROSPERITY TOSS
Rice was thrown in honor of a newlywed couple’s fertility, and also to wish for a good harvest.  Today, other items are substituted for rice because of its potentially negative effects on wildlife.  Consider having your guests blow bubbles, which can also double as wedding favors, or throw petals or sunflower seeds.

BREAKING THE GLASS
The Jewish wedding tradition of breaking the glass is steeped in tradition.  Although interpretations vary, tradition states that, at the end of a Jewish ceremony, the groom steps on the glass (wrapped in a cloth) and the audience shouts, “Mazel Tov.”  That many shards that the groom’s action produces represent the hope that the couple’s love will be as plentiful.  Other interpretations suggest that the broken glass also symbolizes the need to foster love because it is a fragile virtue, or the end of the couple’s lives as singles.

CATHOLIC WEDDINGS
Catholic weddings are conducted under the instruction of an elaborate liturgy.  The service is typically performed in English, or preferred language of the bridal party, moving through six distinct stages.  The audience is uniquely involved in this ceremony tradition.

DOVES
For Christian-Judeo cultures, doves symbolize peace and fidelity.  Doves are monogamous birds and are used to symbolize the union of a couple.  Releasing doves at your wedding can add ambiance and grace to your ceremony.  If you’re planning to incorporate doves in your wedding, plan ahead.  Businesses that offer dove releases will cancel in windy, rainy, or snowy conditions to protect their birds.  Butterflies could always be substituted for doves.

OLD, NEW, BORROWED AND BLUE
Something old is an object that symbolizes a bride’s kinship to her family.  Something new represents a bride’s union with her husband’s family, and her new future.  Something borrowed is intended to be an object from a friend or the family who enjoys a successful marriage; chose in hope that the newlywed couple will also enjoy a strong marriage.  Something blue represents purity.  These trinkets might be given to the bride by her family or she may have ideas for what she wants to use.

WHITE AISLE RUNNER
A white aisle runner symbolizes walking on sacred ground.  Plan ahead before using one outside --- wind and wet weather can ruin this tradition.

UNITY CANDLE
Moments before the ceremony begins, the mothers of the bride and groom walk to the altar together to light candles. Once the bride has entered, she and the groom each take the candle that their mother has ignited and used it to light a middle candle with both their flames.  Wine can be substituted for candles depending on your religious affiliation.

THE WEDDING RINGS
A circle has no end.  The ring represents a couple’s eternal and endless love for one another and it is given to symbolize faithfulness.  More importantly, many ancient civilizations believed the ring finger held a vein that led directly to the heart.  Placing a ring on the fourth was a way of connecting the promise of faithfulness to the heart.

KISSING THE BRIDE
The kiss is a way for a couple to publicly seal their marriage.  This act symbolizes a sharing of souls.  It’s also where we get the saying, “sealed with a kiss.”

THE COUPLE PRONOUNCED AS HUSBAND AND WIFE
When an officiant pronounces a couple “husband and wife," he is doing so to declare a definite point in time when a marriage began.  It is spoken to establish the validity of a union.

SIGNING A GUEST BOOK
Marriage is a between two persons and a guest book is a way for witnesses to establish their witness of a union.  Many sources say the book should be signed after the wedding.  In much simpler terms, a guest book is a great way to remember who attended your wedding.
​
THE RECEIVING LINE
The receiving line is an opportunity for the couple to greet all guests, and for guests to offer congratulations and good wishes.  Parents of the bride and groom also stand in line to receive blessings and congratulations from guests.